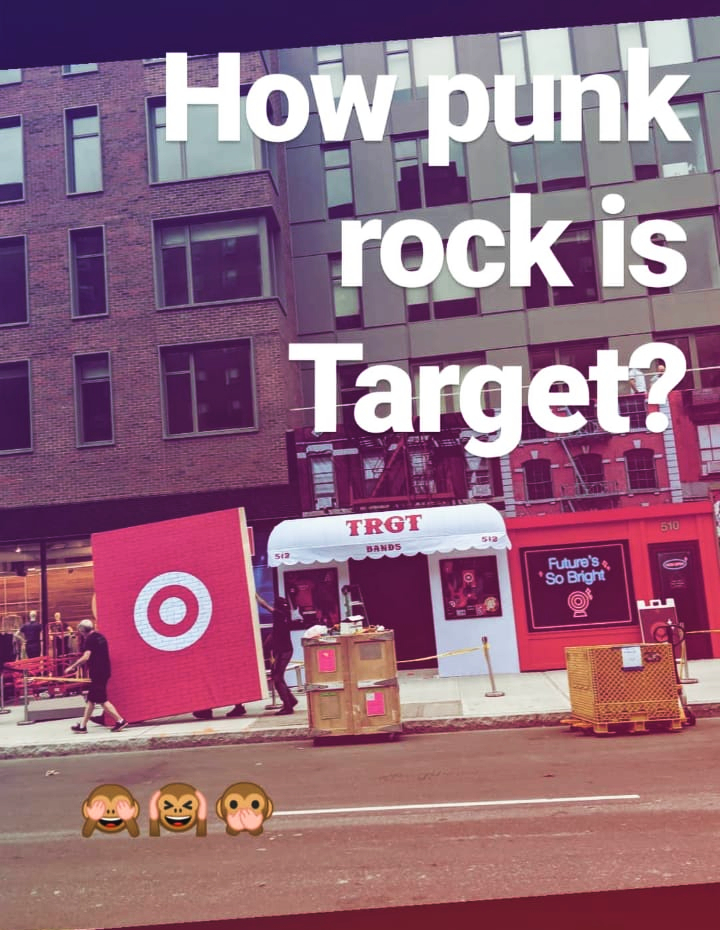 The Alphabet City Target is here and the mega-company made a huge unintended splash by re-purposing the iconic awning of legendary punk venue CBGBs to announce their grand opening. Scores of people in Target’s marketing team decided that somehow, that it would be a great idea to take CBGB’s storefront and recreate it into a Target. Or TRGT. Take a fucking look at this shit: 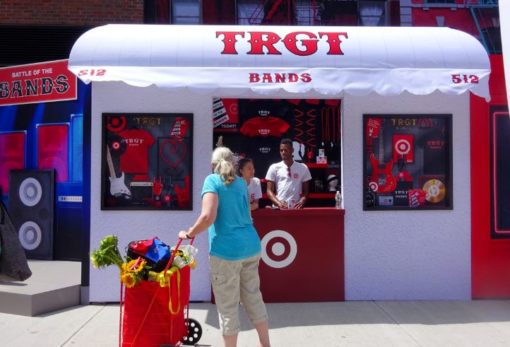 Not that I had any connection to CBGB, or was a part of New York’s hardcore punk scene, but it doesn’t mean you can’t understand, even in theory, or be put off by the blatant gentrification. I don’t always agree with Jeremiah Moss, but no one captured the TRGT moment quitel like the first couple paragraphs of his blog post about the sickening decision to take a symbol of anti-establishment and, well… establish it:

The Target chain has opened a store on 14th Street and Avenue A, and for their grand celebration they have committed what might be the most deplorable commodification of local neighborhood culture I’ve ever witnessed. Along the first floor of Extell’s luxury monster, known as EVGB for the Trumpian claim of “East Village’s Greatest Building,” Target has constructed a simulacrum of the hyper-local New York street–the sort of street that is being wiped out by corporations and developers–and it comes complete with all the signifiers.

Here’s another great passage from the Village Voice:

As neighborhood appropriation goes, creating a crass and cynical simulation of the local New York streetscape is bad enough. But worse yet, it’s this very ecosystem that is being erased, block by block, by the presence of chain stores like Target — as well as by big developers like its landlord, Extell, which has named the new luxury building in which Target sits “EVGB,” a riff on CBGB that is supposed to stand for “East Village’s Greatest Building.”

And we’ll end with this, from the same article:

It is part of the larger process of hyper-gentrification, the state-sponsored class takeover of urban neighborhoods in our era of late-stage capitalism. Gentrification long ago stopped being the small-scale, sporadic process it was when first observed in the late 1960s and ’70s. By the 1980s, it had become official policy for making New York friendly to big business, tourism, real estate developers, and upscale professionals. That top-down process has since grown exponentially, glutting the city with luxury developments and chain stores that homogenize the streets and rob New York of its character and variety, as well as its affordability.

When (and where) is the new Trader Joe’s opening in the East Village?