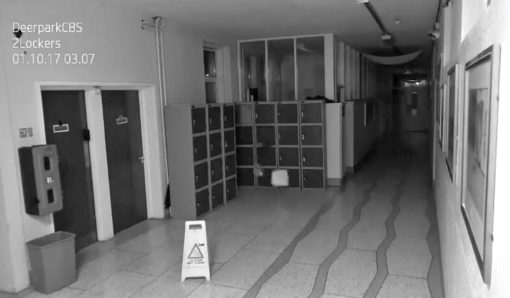 If you’ve been on the social medias lately, you probably have come across the incredibly disturbing security video from Deerpark CBS Secondary School in Ireland.

The school’s closed-caption TV camera focused on a hallway, caught footage of what looks to be a ghost opening, closing and shaking lockers, tossing books around and taking it’s frustrations out on a wet floor sign with no physical person in sight. Watch the freaky video

The video was captured on October 1st at exactly 3 AM, which is coincides with the Witching Hour, according to Seventeen Magazine.

We all grew up with urban legends about ghosts haunting houses, cemeteries or fields, and Deerpark is no different. The school is almost 200 years old. After nearly two centuries, it’s no surprise that this incident isn’t the first time something creepy has occurred at the school. Aaron Wolfe, the Principal of the school weaved this story about another supposed paranormal activity:

“For example on one occasion the school was hosting an exotic bird show, and the birds arrived the day before, because the organizers were worried that someone might break in and steal the birds, someone had to stay overnight. That person left the school in the middle of the night – they refused to stay any longer as they said that they heard ‘the last call’ being played on a trumpet – of course this could have just been the wind.” 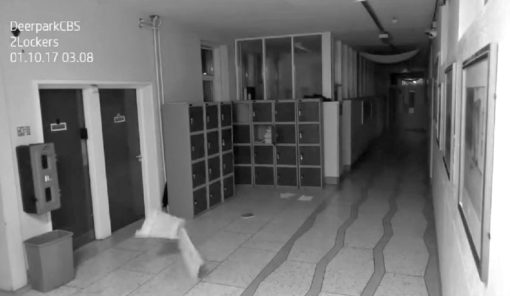 Is the Haunted High School “Ghost” Footage Real or Fake?

Now that you’ve watched the video, do you think it’s actually an apparition, or some sort of high school hoax? Whenever we can’t explain something, and especially in these times, our leaning is to be cynical; that the video is fake. After shaking off the heebie jeebies, we wondered also whether it was a real video or not. So we started with a search on Snopes.com to see if they had information on the authenticity of the video. The search results came up empty. Creeeeeepy.

Even the teachers and faculty of Deerpark CBS are as confused and creeped out as we are “If it’s a prank, we don’t know how it was done.”

“If it’s a prank we don’t know how it was done. Motion sensors were set off at this time, that’s how it was caught,” Wolfe told UNILAD.

“The school is built on a site known as Green Gallows,” Wolfe told Today.com. “In the 19th century, criminals were hanged here. We only found that out on Monday. The pub nearby is actually called ‘The Gallows.'”

The Principal seems genuinely uncertain how this all happened. We were able to find a video that attempted to debunk the video, but you can always find something if you’re looking for it. Unless there’s a report that comes out that it was some sort of practical joke stitched together on a middle school student’s laptop, there’s really no explanation for it. And that’s really the scary part, right?

What’s your thoughts? Real or fake?