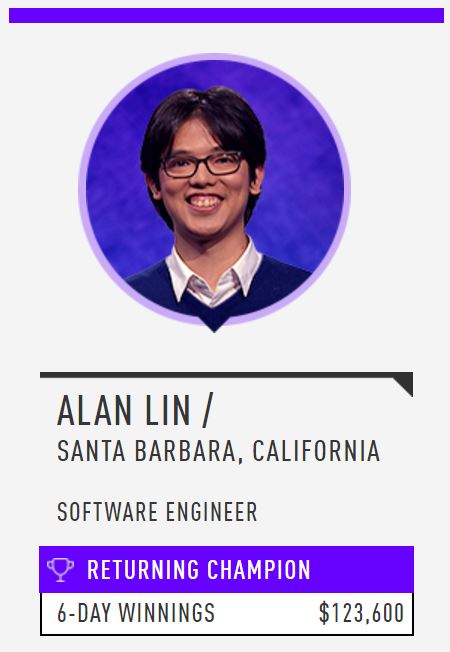 Alan Lin is the latest Jeopardy! champion to pile up the wins and money, but where does his numbers stand up against other winners?

As of this post (which we’ll update if and when he continues winning), the former California Institute of Technology grad has 6-day winnings of $123,600 after defeating Matt Cohen and Meghan Treptow.

That’s a lot of dough and a good streak of wins, but youthful Lin’s totals don’t quite put him on any Jeopardy! lists of all-time Jeopardy! winners whether in win totals or total winnings. Not yet, at least. If Lin wins eight games, we can start getting a little more excited talking about streaks and history with a little more seriousness. Right now, there are approximately 20 players with more wins to their names than Lin. Peep the list below

What Does Jeopardy! Champ Do With Their Winnings?

Unlike many game shows, the money you get from Jeopardy has the potential to be life-changing.

I wish we knew more about what Jeopardy! champions did with the money they take home. From the several dozen of episodes I’ve seen, it seems like most will pay off their student loans, some go on a little European vacation, or just store it away like a smart nerd is expected to do.

Josh Hager, a former winner, used the “prize money to pay off almost all of his student loans, and he and his wife moved out of their studio apartment into a spacious house. ‘Jeopardy! really did change my life and I can’t be more grateful'” he told Mental Floss.

After his third win, Lin was asked by the Santa Barbara Independent what he was going to do with all his $64,000  in winnings (at that point). He responded responsibly: “I am planning to potentially buy a house. Put a down payment on it. That’s kind of a boring answer, but yeah that’s what I’m planning to do”

Now that it’s May and he’s got more than double his Jeopardy! winnings from when he was asked that question on April 27th, his ability to afford a bigger house.