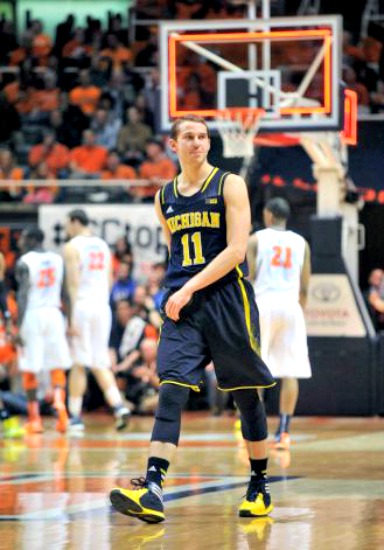 Nik Stauskas is a Canadian of Lithuanian heritage, so some of the classy, assy Illinois fans in the student section starting chanting “USA! USA! USA!”

They began harassing Stauskas because he was inbounding the ball near halfcourt, and right in front of the section. This happened right before the end of the first half with Michigan up already up 49-30.

Make that 52-30 and make me a bigger believer of karma. Michigan went on to win the game. Stauskas would end with a game-high 24 points. And the Wolverines would capture their first Big Ten Championship in over 25 years. Feels even better on a night where such foolishness was showered onto the court.

Racism of Any Color
Of course this wasn’t a big deal because it was a bunch of white guys chanting at another white guy, but this goes to show how focused we are on color when dealing with racism — on both sides.

Because it’s white on white, it doesn’t matter? Of course it does. It’s just fucking lazy not to think it doesn’t matter. People shrug their shoulders because it’s Canada and Lithuania instead of Nigeria or Brazil? We all should still be bothered by this overt ignorance.

Until then, let’s enjoy another angle of karma-incarnate.

Stop talking up Aaron Craft like he’s a superstar. He’s not even close.